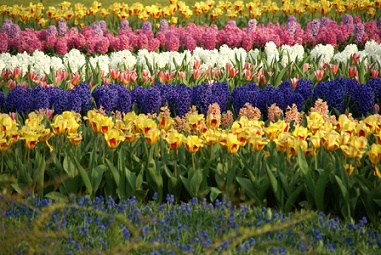 The Keukenhof is one of the national attractions of the Netherlands. Not only foreign tourists but also lots of Dutch people come back every year to enjoy the beauty of this world famous flowergarden. (annually about 700.000 national and international visitors).

The Keukenhof is situated in Lisse, a small town between Amsterdam and The Hague. In this region are many bulb fields and flower companies. Lisse is in the centre of it.

The Keukenhof is open only two months a year from March 22 to May 20. The reason for this short period is that most of the flowers are spring bulbs (which bloom in spring). Opening hours are between 8.00-19.30 including sundays and holidays. Adults pay €14,50 per person, Children between 4-11 jaar: €7

– Five self-service restaurants with a terrace
– In the park are special picnic spots.

Distance from Amsterdam Central to Leiden is 36 minutes by train. Full fare is €16 return. At Leiden Station or Amsterdam Airport visitors can buy a combined ticket (bus + entrance) for €21. The bus station in Leiden is next to the train station. It takes 25 minutes with the bus from Leiden Station to the Keukenhof. The last bus to Leiden Station leaves at 19.51. If you don’t want to go on your own: many hotels in Amsterdam can book a trip for their guests.

From Schipol Airport is a direct connection to the Keukenhof (Bus nr 58). The trip takes 35 minutes. The last bus back to Schiphol leaves at 19.22 from the garden. There is a combined ticket (bus + entrance). Look here for the most recent timetable.